Several requirements for this project

The smart-car was able to avoid obstacles from all directions automatically. This functionality was made possible by utilizing Ultrasound scanners and algorithms on the controller. When there were obstacles in one direction, ultrasound would be blocked and reflected back, so we could detect obstacles’ direction and distance by measuring reflection of ultrasound.

However, there were several disadvantages of other two characteristics:

Finally, we chose infrared light as the basic characteristic we detect and measure to find the fire

In some emergence situations, such as the situation when car itself can not react as quickly as human controller, we human should take control of the car. So we developed smartphone based client to control smart-car.
On the client side, human controller is able to see the overall situation(speed, direction) of smart-car, and control its movement
This functionality was made possible by utilizing Android platform and Bluetooth interface of smartphones.

In order to make our overall structure more flexible and reusable, we devised and implemented other four components separately and manage them through the center-algorithm on the center controller.

This component was responsible for managing other four components.
MSP430 controller, a 16 bits, super low energy consumption, RISC(Reduced instruction set computing) processor, was the major part of this component. This controller was able to connect and manage wireless component, motor component easily through its rich IO mouths. Additionally, applications could be transmitted and flashed into this controller through USB, therefore the development process was quite efficient.

In order to avoid obstacles, we chose ultrasound as the basic measurement signal. ultrasound spreads linearly and when there were obstacles, certain amount of ultrasound of same frequency would be reflected back. Utilizing this mechanism, we devised corresponding algorithms on the controller.

As investigated in the first section, we chose infrared as the basic detection source. Thus ST188 infrared sensor was used by us to implement this functionality. 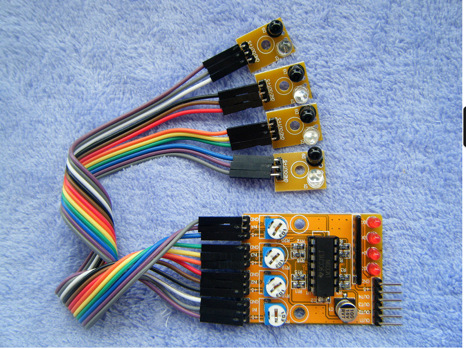 Putting out a fire required strong wind from a big fan. Under this condition, we can not connect this component directly into the IO mouth of center controller but to design a specific current driver for this component. After investigation, we chose L298N, a efficient and cheap current driver to take this responsibility.

For the movement function, we had to drive four DC motors at the same time, this requires on current could be met by L298 current driver. 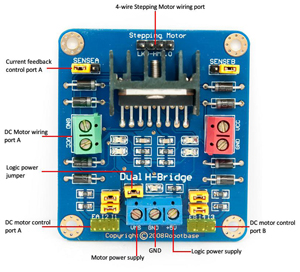 In order to trace the real-time speed, we chose 74HC14 infrared component to implement this functionality.
Speed tracing and tracing wheel

In order to communicate with smartphones through Bluetooth, we chose HC-06 Bluetooth component as the basic communication controller.

Combining these basic signals, we could produce some more complicated commands such as forward-left and backward-right. 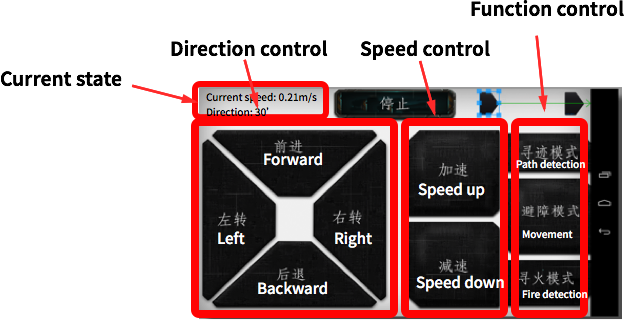